G
Written by Greg Holtzman
Updated over a week ago 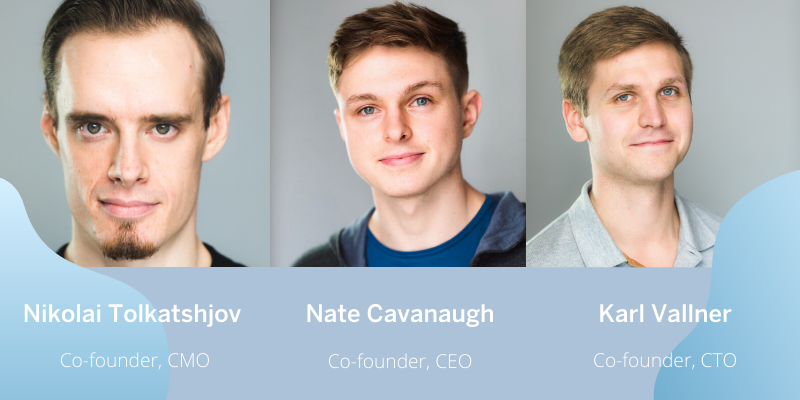 This December, we are celebrating our three co-founders who inspire and drive the Brainbase team everyday! From starting out in a tiny space with one table and 7 people, to moving into a larger office with around 18 employees (and counting!), we are excited to dive into how Brainbase came to be and where they're planning on taking the company next.

What inspired you to start Brainbase?

Nate: I initially wanted to solve patent trolling, but after learning more about the issue, my general takeaway was that it is a problem to be solved politically, not by a startup. After learning more about the IP space more broadly, I realized there was still an opportunity to build a meaningful company in this industry and got very excited about what that could look like.

Nikolai: That’s probably the most boring part about the company. There wasn’t a late night inspiration, or a trademarked product that fell on my head that led to building the licensing management product that we have today. It was rather a series of events that lead to this – starting with Nate (our CEO) sharing his idea of building a marketplace for intellectual property and I was like, “I don’t know anything about the industry but it looks interesting…” and 3 years later, here we are.

Karl: My second choice of education would have been economics, so I have always been interested in making large financial ERP systems ever since I started working with Dynamics AX 2012. Brainbase seemed to be right up my alley.

Any upcoming projects you're excited about?

Nate: I’m very excited about many of the new features on our Brainbase Assist product roadmap that are coming in early 2020. We’ll also be announcing something in 2020 that I think will change the trajectory of our company and our industry.

Nikolai: I’m really excited to launch the new version of our Assist product in January which will be the biggest update to-date. There are also other products that we’re working on behind the scenes that we can’t wait to unveil. 2020 will overall be a big and exciting year for Brainbase and the intellectual property industry, so stay tuned.

Karl: I am happy when my codebase provides tangible value to others - it helps them sell more, create more, and be more productive. Thus, I am most excited for our newest and largest customers who haven't been announced yet, because I believe that we will immediately make them more productive and help boost their company revenues whilst providing beautiful technology that makes their lives more enjoyable.

How do you think Brainbase is changing the licensing industry?

Nate: Our team, customers and investors know that I don’t consider Brainbase to be just a licensing company – licensing is a fascinating industry for a lot of reasons that we care deeply about, but it is still a subset of the larger intellectual property industry. We want to build a product ecosystem around all of the functions related to IP – starting with licensing.

Nikolai: We came in to this industry as outsiders which has allowed us to look at the industry from a new perspective and see where the current shortcomings are. Now we’re working on fixing those shortcomings by providing much needed innovation in the industry that has been stagnant for a long time.

Karl: I think Brainbase is taking the industry to the 21st century - giving them an alternative to the unintelligent and uncomfortable softwares that are currently in use, which will make both the executives and employees happier.

Nate: I love building companies that can positively affect a lot of people. I very strongly believe that the world needs more talented people who are willing to take risks –– whether that be by starting a company themselves or joining a company trying to solve an important problem. It sounds obvious, but the future won’t be better unless people work hard to build it.

Nikolai: Building great products that customers get excited about and love to use in their everyday work lives.

Karl: Making software that provides value to others (usually B2B).

Where do you want the company to be at in 3 years?

Nate: Brainbase will be the leader in IP management and monetization technology.

Nikolai: I want Brainbase to be synonymous with intellectual property.

Karl: I want the company to have an application that is a pleasure to work on for our engineers, that customers love for its vibrant design and good UX, and that brings value to the companies using it.

What makes you passionate about Brainbase?

Nate: I am passionate about improving large, seemingly unsexy industries that other people don’t want to work on. Brainbase fits these criteria to a tee! Also, it’s awesome to be able to work with some of the most recognized brands in the world.

Nikolai: Having a big empty canvas and ability to paint it the way we envision it. Being able to influence and guide how people in a large industry collaborate with each other is both humbling and exciting.

What does a typical workday look like for you?

Nate: A lot of emails, calls and meetings about product, sales, strategy, recruiting and fundraising.

Nikolai: I usually check and answer my email during a morning workout so whenever I get to the office, I like to tackle the most important or hardest task that day. It’s usually related to planning new features, so I like to have around 2-3 hours of uninterrupted time for that, after which I usually check my email/messages and go to lunch. After lunch, I like to have meetings or any calls until the meal fatigue passes as this is usually not the most productive time of my day. Then, I usually continue with my planning task and finish the day with mundane tasks that don’t require a lot of creative thinking, like performing QA, going through the product, writing bug reports, answering messages/emails, etc. Before I leave the office, I also revise my weekly to-do list based on what happened that day.

Karl: I have been trying not to overwork, because in the past, a typical workday was 7 days a week, starting at 9AM and ended at 11PM-1AM, and it was spent in my dark corner coding. Due to those pushes we made with the team, we won many large customers! I have now been working more normal hours, talking to my co-workers, making jokes, being lighthearted, and having a lot of fun at work. A good workday is spent having fun, but still producing results!

Favorite place to eat in LA?

Nate: TAO is one of my favorite places because it’s where I went with my co-founders after we received our first term sheet.

Nikolai: There are so many amazing places that it changes quite often. Right now I can’t get over Teddy’s Red Tacos!

Karl: Zelda's sandwiches is definitely a favorite of mine in LA.

Do you have any after-work hobbies/activities?

Nate: I go to the gym and read, but not really otherwise. I’ve found that the most successful people in business, tech, sports, politics (or anything, really) have an “unhealthy” obsession with what they do. To be the best, I think you just need to put in the work, day in and day out.

Nikolai: I’m very fortunate to be doing something that I love so my work is also partially my hobby. Besides that, I also like to read a lot, I’m a big fan of music so going to live shows of my favorite artists, staying healthy and watching UFC fight nights with friends.

Karl: I recently took up electronics – I built a small battery powered RC car out of Legos, learned how to design wiring, build mechanical steering and power train systems, integrate tangible hardware with intangible software, work with electricity, coded the controller on a Raspberry Pi microcomputer and made it remote controllable over WiFi. I also learned that each time you put a wire in the wrong place or miscalculate the voltage – you’re going to have a bad time. Software bugs are much more forgiving and making one doesn’t require buying a new computer.

Nate: Moving out of our apartment and into our first office is something I will never forget.

Nikolai: There are so many - I believe we have the greatest and most fun team, and there’s something memorable happening on a daily basis. However, I do have very fond memories from our first office. There’s just something special about being crammed up in a small office space with 6 other people sitting around one big table trying to figure out if it’s the smell of someone's feet or microwaved food.

Karl: I love going out with my co-workers after work. Especially on Fridays, with beer included!

We hope you enjoyed learning more about how it all began and what Brainbase stands for today! Happy holidays from the Brainbase team to yours!

Did this answer your question?